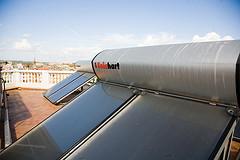 Modern technologies for renewable electricity half of electricity in Germany should in the future come from renewable energy sources, that is the plan for 2030. In the year 2050 80% then the required current so-called green energy “be. This means that renewable energies must be competitive until 2030 even without subsidies. In Germany, the wind energy provides enough potential to make these goals can be reached. Modern technologies, such as a gearless turbine, Sword-shaped rotor blades and innovative software that optimally balances the wind load on the rotors, should allow to act a kilowatt-hour from wind energy at the same price as a kilowatt hour from coal. So, the 10 megawatt wind turbines at sea should soon introduce large amounts of renewable power in the networks. But especially low-loss transportation of renewable generated electricity is important. With so-called electricity highways, such as, for example, high voltage direct current transmission (HVDC), the current without large losses as a whole can Country distributed and made available to the user.

Projects by Siemens in China were able to show that around 95 percent of the electricity consumers arrive at a distance of 1400 km and a transmission capacity of 5,000 megawatts. The loss of conventional AC power lines are two to three times as high over such a distance. However, a relevant problem in most renewable technologies, is that they strongly depend on the weather, what becomes clear especially in the case of solar energy and wind energy. Power fluctuations must be compensated particularly quickly and effectively. Therefore, an efficient storage of electricity derived from renewable energy is particularly important. Excess energy needs can be stored in memory power for days or even weeks.

The resulting surplus electricity can be used to produce environmentally friendly hydrogen in electrolysis plants which then underground to save and finally feed if necessary into the natural gas grid. The Hydrogen is then again into power back and can be used for example in fuel cells for electric vehicles. The batteries of electric vehicles can in turn also serve as intermediate storage and emergency storage for the grid. To compensate for current uctuations also fast start enabled gas power plants make a major contribution. These power stations are able to be installed in less than 30 minutes from a standstill on the full power of 578 megawatts. This power is enough to supply a city like Berlin. In addition, fast start enabled gas power plants in combination with steam turbines are particularly efficient and therefore in a position to turn over 60 percent of the energy of natural gas to power around a third less fuel per kilowatt hour than the average of the world’s installed gas power plants it needs. So you can conserve resources, and reduces emissions. The power supply in the new age of power ensure a smart power grid that so-called smart grid, to. Because the requirements the energy supply are more complex. Not only the users behavior itself has changed, the power of each individual user’s needs for electricity suppliers over long distances across unpredictable also still remains. In addition, that 15 years ago still a few hundred energy producers have fed its power in the German network, while it will be millions in the next few years. Because the consumer will be reinforced to the energy suppliers. Solar plants, biogas plants or small CHP run increasingly by small business, farmers or private owners, need to produce twice as much electricity as they do.